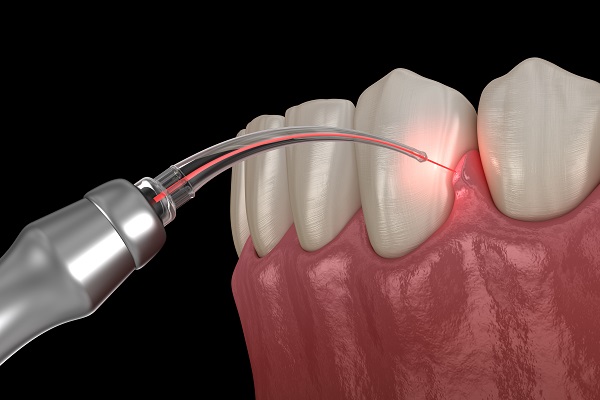 Introduction:
Oral frenula are bandlike formations of congenital origin located on the midline, which are composed of fibrous, muscular or fibromuscular tissue, and are covered with a mucosal membrane. They are regarded as anatomical formations that under normal conditions, do not have pathological consequences. However, in some cases they can present clinical problems, fundamentally of orthodontic, prosthetic, phonetic or periodontal nature.

The upper lip frenulum is an oral mucosal membrane extending from the internal surface of the upper lip to its insertion on the midline of the attached interincisal gingival tissue of the upper maxilla. In some cases, the frenulum descends to the alveolar margin and inserts at the interdental papilla in the palatal vault. Two situations can be differentiated from the clinical perspective.
In children, these frenula mainly cause interincisal diastemas, which in turn require orthodontic treatment. In adult patients, frenula give rise to prosthetic problems, since they interfere with the retention and/or stability of the denture, and cause irritation.

Different classifications of lip frenula have been described on the basis of their morphological characteristics.

As to those presentations characterize by an important associated muscular component, the upper lip frenula can cause certain anomalies or problems, such as interincisal diastema, denture-related problems, periodontal disease secondary to retained or impacted food, oral hygiene difficulties, and impairment of lip mobility and/or a short lip.

The diagnosis is based on the aforementioned clinical data, with attention focused mainly on the presence of an interincisal diastema and a positive papilla sign.

This diversity of laser use is due to its superior properties over conventional scalpel procedures which include bacteremia reduction, ease of soft tissue ablation, hemostasis, slight wound contraction and slight scarring, immediate sterilization, edema reduction, mechanical trauma reduction, no or little operative and postoperative pain, improved patient acceptance, more rapid healing, little need for suturing, much easier technique, and necessitating no topical Anesthesia in most of cases.

Patient Motif – Male 37 Y.O referred to private practice for Aesthetic reason. He was unhappy with his smile and demanded consultant,

thus, replacements of crowns treatment was suggested combined with laser assisted frenectomy for better final Aesthetic outcome. examination Presence of a high maxillary frenal attachment was identified as the cause of midline diastema. 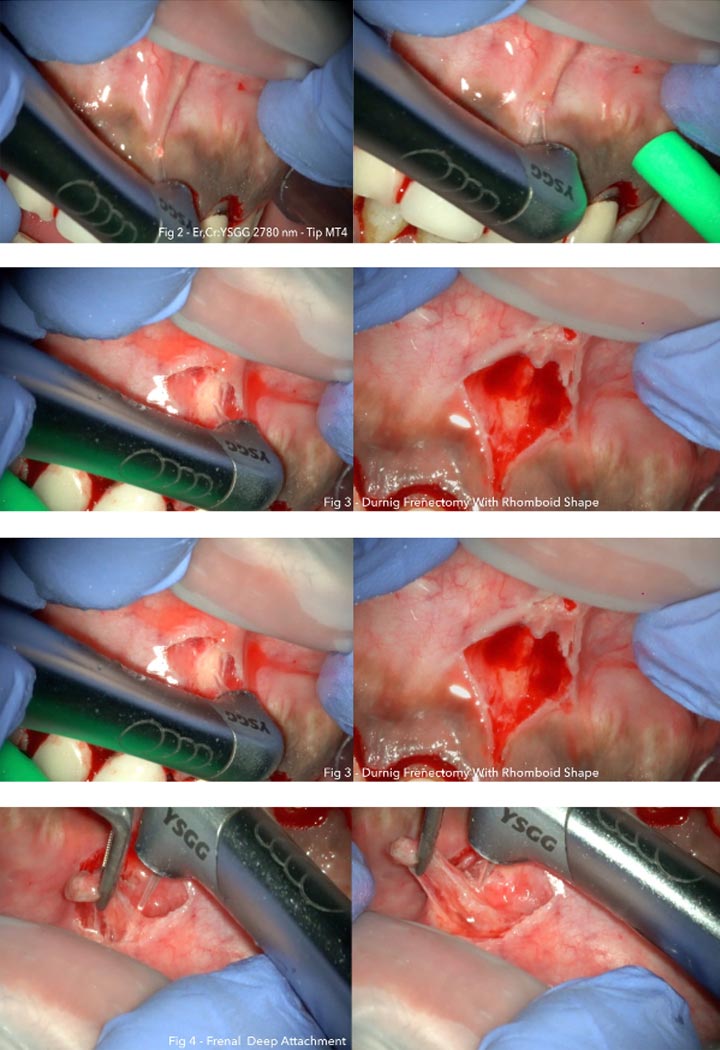 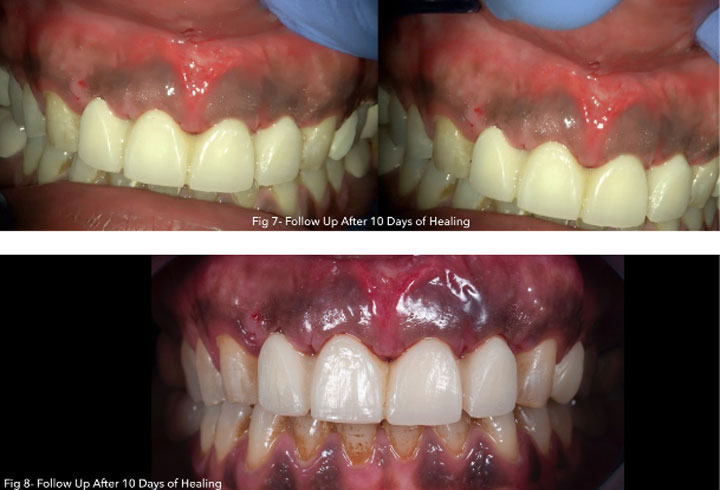 Follow up: At post-operative visits, patients reported no post- operative pain or minimal discomfort. None experienced post-operative bleeding at a distance of few hours.

The wound healing process occurred by secondary intention by formation of fibrin clot and showed no tension on the margins and improved adherent gingiva formation in the surgical area.

Presence of a thin line of scar tissue appeared progressively after three weeks, as expected, on the mucogingival junction forming the new point of insertion of the frenum (Class I), without affecting the smile line.

patient reported that the procedure was well tolerated and “acceptable”.

Diagnosis: Presence of a high maxillary frenal attachment was identified as the cause of midline diastema, Therefore the patient had to be treated a frenectomy procedure with er,cr:YSGG 2780 nm to excise the aberrant frenum was planned.

The problem was explained to the patient and a written consent was signed.

Aims: The introduction in recent years of surgical lasers has led to new alternative treatments. Compared with the conventional technique treatments, lasers offer new perspectives due to their differentiating characteristics.

In frenectomies, the main advantages of surgical lasers include the achievement of a precise and clean surgery, and shorter surgery times compared with conventional techniques.

No risk of bacteremia. Excellent wound healing. No scar tissue formation. Bleeding control (dependent on the wavelength and power settings).

Usually no need for sutures. Use of fewer instruments and materials and no need for autoclaving (economic advantages).

Ability to remove both hard and soft tissues. Lasers can be used in combination with scalpels (however, the laser is a tool and not a panacea)

Treatment: Local Anaesthesia was always used infiltrating 0.3 ml local Anaesthetic (4% Articaine with vasoconstrictor 1:200.000) at buccal and palatal site of insertion of the frenum.
The operative modality was in “focused” mode, with the tip in close contact to the target tissue: in touch with frenum, not in-touch on the periosteum. The lip was lifted with hands by the operator to stretch and expose the frenum. Four main consecutive steps were performed.

Step 1: The first incision is performed vertically along the axis of the frenum while stretching the frenum itself that in few seconds opens in a rhomboidal shape wound; incision 1 starts buccally at papillary level, extending up few millimeters (5-10 mm) above the muco-gingival junction, as ideal point of insertion of a frenum (Class I), and down toward the palatal papilla, the actual site of its insertion.

Step 2: The second incision then follows with a V-shape design, gentle incising the periosteum along the mucogingival junction without extending distally beyond the median axis of central incisors, on both sides. A couple of passages from one side to the other allows marking of the mucogingival junction, designing the formation of a thin connective scar on the junction, as the new point of attachment of the frenum (Class I).

Step 3: The vaporisation of the remaining collagen fibers is performed horizontally to dislocate the connective fibers from the periosteum in the opened surgical area.

Step 4: The last incision vaporizes the connective fibers at palatal site of the papilla between central incisors, that are the main obstacle to the closure of diastema, connecting to the incison 1 and completing the procedure.

Surgical technique was used with laser: follow the vertical axis of the frenulum until the wound presented a linear shape.

At this point the laser was applied transversely until the wound took a rhomboidal shape. 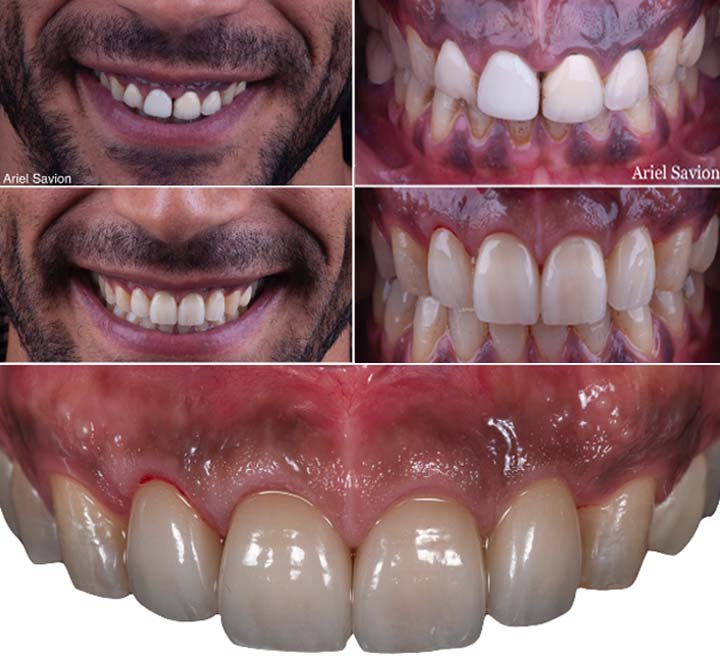 During the first week post-surgery patients were instructed not to brush the treated area, but to only self-apply a 1% chlorhexidine gel on the treated area at the end of the oral hygiene procedure.

Patients advised not to be alarmed by the aspect that the wound may develop in the event that a white exudate showed up during the second intention healing of the wound.

Conclusion: The use of laser is useful for a simple frenectomy due to their numerous advantages.
The most important benefits are as follows:

technical simplicity, with a short operating time; absence of post- operative swelling and pain; and the achievement of a correct upper lip frenulum reinsertion at the MGJ.

Peri-implantitis treatment with laser under magnification

Complete the form and a representative will contact you shortly 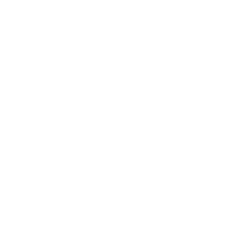 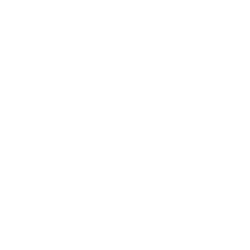 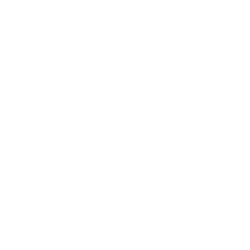